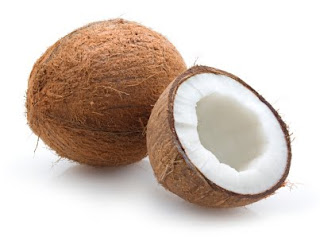 As kids we would get whole coconuts from the shop, hammer a hole in two places with a tent peg, pour the water into a glass and drink some before we hammered the coconut to split it open so we could feast on the white flesh. All very exotic in the 1960s.

Now coconut water has gained public interest as a refreshment, especially with the allure of being a natural drink, not a concocted soft drink. Some have even suggested that coconut water has special properties and would make a good sports drink substitute.

Coconut water is the water from within the cavity of a coconut, and is not to be confused with coconut milk made from coconut flesh or the coconut oil used in food manufacture. People in tropical countries have enjoyed coconut water for centuries and it is the water of the young coconut that is prized the most, partly because it is sweeter, having a much higher fructose content. Coconuts are grown in about 90 tropical countries.

You can see from the table below that coconut water has a very small amount of protein, virtually no fat, and a modest amount of carbohydrate in the form of sugars. It will quickly empty from the stomach and be absorbed readily by the small intestine. It is low in sodium and a good source of potassium, just like you would find in fruit juice. The sodium content is higher when the water is taken fresh direct from the coconut, around 30-100 mg in 100 mL.

I have compared the information with that of a popular brand in Australia. You can see that Cocobella is sweetened with sugar and pineapple juice because, like when I was a kid, the taste of coconut water wasn’t a winner. Then again, by the time a coconut reached outback South Australia in 1968, it wasn’t likely to be fresh. (Note: Divide kJ by 4.2 to get Cals).

Is it a health drink? A sports drink?**

Because it is low in sodium it isn’t similar to a sports drink, which has a modest amount of sodium to assist water absorption and retention in sport. Yet coconut water is very well suited as a regular drink with about half the sugar found in soft drinks. One small study indicated that coconut water was a good post-exercise rehydration drink, although it was rated as being less enjoyable than a sports drink. If you are doing plenty of exercise then the sports drink beats coconut water, but if you are looking for a lower kilojoule refreshment compared to soft drinks then a chilled coconut water could be the answer.

I suggest that you be really skeptical of any marketing health claims for coconut water. It does have a small amount of minerals and vitamins, but not really enough to get excited from a nutrition standpoint. Enjoy coconut water as a drink and a way to keep well hydrated during mild sweat loss, just note that it is not a substitute for a sports drink in endurance events. I can’t find a true “pure” coconut water in the supermarket around where I live; you may have more luck in the bigger cities or a health food store.

Posted by Glenn Cardwell at 5:49 PM

I also remember having my Father open the coconut so we could have the water before cracking it open. Those were the good day's. Now I must get it in a bottle or find someone to open it for me.

Good sharing, Coconut water is the very stuff of Nature, biologically Pure, full of Natural Sugars, Salts, and Vitamins to ward off fatigue… and is the next wave of energy drinks BUT natural! More info on coconut water benefits please visit:
http://kidbuxblog.com/why-is-drinking-coconut-water-good-for-health/

san diego water treatment, I would like to say that this blog really convinced me to do it! Thanks, very good post.