Why are bananas bent? 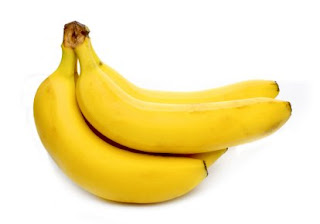 Because it’s natural, written in their genes. The banana is negatively geotrophic, meaning they grow up against gravitational pull. Cool huh? You won’t see an apple or a cherry try that. You see, the banana starts out straight as the bunch emerges, and then becomes bent as it grows older, just like a radical teenager. The pull tab is where the banana was joined to the plant and the black nubbin at the end is what remains of the flower, at one time pointing upwards. Bananas: the anti-gravity fruit.
Posted by Glenn Cardwell at 11:17 PM No comments:

Getting kids to eat their veggies

Vegetables were probably never that big in the human diet. We evolved eating meat, seafood, nuts, seeds, fruits, tubers, fungi, berries and insects because that’s where the kilojoules are. When you need energy (kJs/Cals) each day to survive, why bother eating a leaf (lettuce), a flower (broccoli) or something else that is mainly water? Add the fact that 10,000 years ago you never met your grandparents and anyone reaching the age of 30 was seriously old. Back then you weren’t eating to avoid the diseases of aging, such as cancer. You were eating to survive.

So what’s the point you are making?
Simply that humans didn’t evolve as big veggie eaters, so it is no real surprise that we still aren’t big veggie eaters. Sure, we have undeniable evidence that vegetables provide nutrients and bio-active compounds and that eating them helps us control our appetite, reduce our risk of heart disease and some cancers. They are very useful attributes as good-living folk should expect to live, on average, until they are 80-85 years old, not the 30-35 year life span of yesteryear.

Children & vegetables
When I talk to parents, I explain that enjoying vegetables does not come natural with most kids (or adults). Many vegetables are bitter, astringent or just plain bland. All parents know that veggies can be disguised in meatloaf, pasta sauce, stews, soups and the like. Recently a journal article suggested there is another tip that we could employ to swing a child towards a particular vegetable.

Researchers at the University of California told students (average age 20 yrs) that after conducting a series of interviews with them, they now had a good profile on their food preference as a young child, determining whether they either really loved or really hated a particular food when it was first consumed. They were also asked to rate their enjoyment of each food today. Three weeks after the interviews, the students were asked back, where they were given their “personalised food preference profile”. Unknown to them, it included one false statement.

It’s just a little white lie
Those with the false statement that they had loved to eat a specific vegetable as a child, actually started to believe it. They felt much more positively about the vegetable and were more likely to order and eat it. The improved positive view of the vegetable continued for at least two weeks even though they had been told only once, falsely, that they loved the vegetable as a kid.

What does it all mean?
With less than 5% of children eating the designated amount of vegetables each day, it is important that parents remain continually positive around veggies and salad. Parents might also include the line “You just loved tomato/peas/pumpkin when you were a baby. Couldn’t get enough of it”. Saying that a few times (not just once) just might entice that child to include it in their menu, without coercion. It certainly won’t hurt. 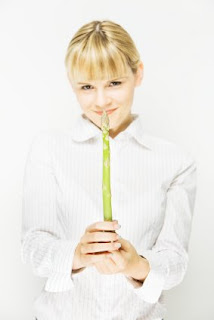 After a feed of asparagus, does your pee smell funny, like boiled cabbage, vegetable soup, or even asparagus? Scientists have recruited pee sniffers to help them find the compounds responsible and the proportion of “detectors” versus “non-detectors”.

To make the asparagus plant less attractive to parasites it produces a compound called asparagusic acid. This same compound, when eaten, is metabolised to other sulphur-containing compounds that provide the characteristic bouquet of your pee after you eat asparagus. Although we all excrete the same compounds after eating asparagus, only around one in two people from a Caucasian background, and nine out of ten from a Chinese background can detect the odour.

Asparagusic acid and its metabolites are harmless. So is their aroma. To me anyway, being a non-detector.
Posted by Glenn Cardwell at 6:28 PM 1 comment:

They are called lots of other things too. Usually nothing too complimentary. When a person gains weight, do they increase the size of their fat cells or increase the number of fat cells they have? Or both?

Once you reach adulthood, the evidence suggests that the number of fat cells is the same in both lean and overweight people, so when you gain weight as an adult you are just cramming more fat into every fat cell such that they enlarge.

Conversely, weight loss in adulthood reduces the size of the fat cells, but not the number. Even those that have undergone surgery to reduce stomach size (gastric stapling) retain the same number of fat cells despite considerable weight loss.

The number of fat cells is determined during childhood
Having fat cells has always been important for human existence. Fat cells became storage packs for reserve energy to help us get through any food shortages we may have encountered. Without fat cells we might be able to live only a day or two without food. With fat cells we have a much longer opportunity to obtain food.

If you cannot change the number of fat cells during the adult years, then any difference in fat cell number must happen during childhood and adolescence. Although there is speculation as to when during our youth we can increase fat cells, it seems that adolescence is a key time of accumulating additional fat cells. You can see why there has been concern about overweight children – three quarters of them become overweight adults. Developing an excess of fat cells during childhood may be one contributing aspect to chunky adults.

Today’s fat is different to 1999 fat
About 10% of your fat cells are renewed every year. Old ones die and are replaced by fresh ones. The average lifespan of a single fat cell is around 8.5 years. Their ability to fill with fat is enormous. Someone at 140 kg having the same number of fat cells as someone at 80 kg just shows you how “efficient” they are at doing their job.

What does it all mean?
The adult body has around 80 billion fat cells. They are there for life, being lost and replaced slowly. You can’t change the number of fat cells you have at your 18th birthday. You can, however, have a big say in their size. The paper did not answer the question whether liposuction permanently reduced fat cell number, although they stressed that there is a “tight regulation of adipocyte number” through life.

Posted by Glenn Cardwell at 6:26 PM No comments: