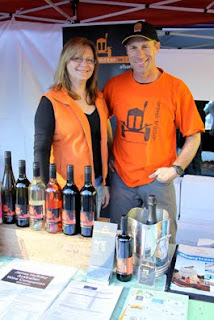 Recently, I popped down to my local organic fresh produce market to see friends Murray and Pam who run the Oranje Tractor organic winery (see pic). Their website [http://members.iinet.net.au/~oranjetractor/] tells you why they spell oranje with a “j”. I grabbed six bottles of their excellent drop and some fruit and bread.

Is the organic food I bought more nutritious? You can bet that most people shopping there believe so, yet we cannot make that assumption. I know I have commented on this before [http://glenn-glenncardwell.blogspot.com/2009_08_01_archive.html], but a new paper suggests there may be no health benefit to buying organic either.

The review by the London School of Hygiene and Tropical Medicine could find only 12 good quality scientific papers that compared the potential health benefits of organic and conventionally grown produce. Half of the studies looked at the antioxidant activity of produce and the maximum number in any study was only 43 subjects. There was no strong evidence that organic foods boosted antioxidant activity in the blood beyond what would be expected. Even if it did, that doesn’t necessarily translate into less disease or a longer life.

It is clear that if we are ever to see a health benefit between conventionally grown and organic produce then we need better designed studies in more people for longer periods. Who would provide the funding? The government might argue it is not worth it until we get more than 1 in 10 adults eating enough fruit and veg of any type. Organic produce farmers may not foot the bill because (a) we are talking millions of dollars, and (b) there may be no obvious long-term benefit to health, hence all those funds will be “wasted”.

The term “organic” refers to the growing conditions only. Choose local organically grown produce if it suits your budget, just don’t try and read too many personal health benefits into the label, except maybe the pleasure of supporting local farmers like Pam and Murray and being a part of a rapidly growing section of fresh produce sales. Personally, I feel particularly up-healthed after a glass of organically produced shiraz.

Posted by Glenn Cardwell at 4:35 PM No comments:

A new US study observed people given cookies that were either regular or organic with exactly the same energy content (670 kJ/160 Cals), as listed on the label. Consumers were then asked which they felt was better for their weight. Yep, you guessed it, the organic version was assumed to be lower in kJ/cals and better for their waistline, even when they were prompted to check the label. The more “pro-environment” they were, the more likely they were to judge the organic cookie as lower in energy. A recent UK consumer study found that 15% of people also thought that organic foods were preferable for weight loss.

The “believing more than is declared” phenomena is not new. In the 1980s and 1990s people assumed that “cholesterol-free” meant low in fat and great for blood cholesterol. Even today, very few people understand that the cholesterol level of a food has nothing to do with the fat content or the type of fat. The law has changed (at least in Australia) to stop the indiscriminate used of the term “cholesterol-free”.

Posted by Glenn Cardwell at 4:34 PM No comments: 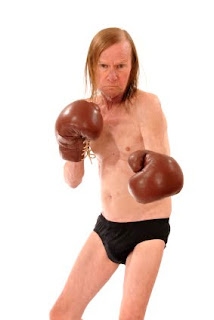 You probably have never heard of Clive McCay and this brief article is not about dieting. As we have discussed before, it is easy to over-eat due, in part, to an abundance of food and encouraging genetics. Calorie restriction is what every (yes, every) weight loss diet promotes, but what of calorie restriction in the lean?

It was 1935 when Clive McCay wrote the first paper detailing an increased life span when food was restricted, as opposed to animals that had ad libitum feeding. Subsequent research suggested that restricting energy (calories/kilojoules) alone was the cause of an extended life, providing that all the essential nutrients were provided. Energy restricted laboratory animals were living about 20% longer than animals eating whenever they liked.

Even as early as 1942 it was noticed that energy restricted animals also had less spontaneous tumours leading one researcher to say: “__It follows that the avoidance of overweight through restriction of food intake may aid in the prevention of human cancer or at least delay its onset.__” That idea was a whole lot more likely in 1942 compared to around-the-clock eating in 2010. The idea still has merit as overweight people are more prone to cancer than lean folk.

A 1946 paper acknowledged that natural energy restriction would be difficult in humans as they have a strong in-built desire to eat. They found that rats that were occasionally energy restricted by being fasted 2-3 days a week also had an extended lifespan and less tumours.

With humans long fascination with looking and feeling young, there have more recently been human studies on energy restriction. Like other animals, it seems that less food means better health and a longer life, although the effectiveness in humans is not yet definite due to our relatively long lifespan (lab rats live for 3 years; many humans clock up 85 years so you would have to track humans for 100 years before you might have the definitive answer).

If you are happy to under-eat once you reach adulthood, then there is a reasonable chance that you will live longer than normal. It will mean no chocolate, cabernet sauvignon, brie, premium ice cream and many other flavoursome foods. I would struggle there. It will also mean being active all your life. Happy with that angle.

What was the first artificial sweetener

I once answered this question in a newspaper article last century. The sub-editor thought I had made a mistake so added 100 years to the answer. We have been using sugars and honey as a sweetener for millennia. The next sweet agent to get attention was saccharin in 1880 (not 1980, sub-editor).

Saccharin is from the Latin word for sweet. It was first isolated by Ira Remsen and Constantine Fahlberg at Johns Hopkins University in the US. Fahlberg was smart enough to patent the production method and became wealthy through its commercial manufacture in Germany. Remsen and Johns Hopkins never made a cent from saccharin.

Saccharin is cheap to make so it became a sugar substitute during both world wars. My parents remember its taste through the 1940s before sugar became more available.

Saccharin has attracted plenty of attention over the years through mainly negative commentary, in the 1980s especially. It is now widely considered as safe for human consumption after scientific scrutiny, being approved for use in over 100 countries.