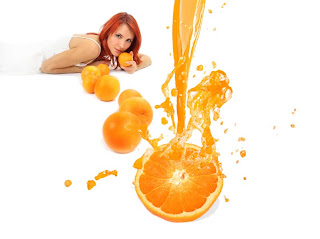 What do you think of those juice bars where for around $5 you can get about 400 mL of freshly juiced veggies or fruit. My local guy does a carrot/beetroot/ginger/something else concoction that’s pretty good and seems to have about five carrots plus other ingredients juiced into it. Does this count as five serves of vegies?­ asks Gary Norrish.

If you can combine carrot and beetroot and still have a palatable drink, you have done well Gary. Juicing fruits and vegetables will retain the nutrients if consumed soon after. The only thing you may lose is the fibre if that isn't returned to the juice. That’s the key missing ingredient in commercial packaged vegetable and fruit juice too - very little fibre. About half a cup of veg, and one medium fruit, is considered a serve, so I'll leave it to you to work out how many serves you get from your special blend.

Remember that drinking fruit and veg is a lot quicker and easier than eating fruit and veg. This is important for weight control. Eating slows down the rate of kilojoule (calories) consumption giving the body extra time to determine when enough is enough. For example, a 250 mL glass of apple juice is around 460 kJs (110 Cals), the same as one and a half medium apples. Which would take longer to eat and be more filling?

Posted by Glenn Cardwell at 3:02 PM No comments:

Reader Carmel, from deep into the central west of New South Wales, was astounded that there was a fibre-free mango on the market, as claimed on the label. Not having tried one, my educated guess it that they are suggesting that this mango doesn’t have the stringy bits that stick between your teeth especially as you get close to the pip.

Posted by Glenn Cardwell at 3:01 PM No comments:

Are chickens dosed with hormones?

Alyson wants to know if there are hormones in chicken making her daughters fully mature women before they leave primary school. The brief answer is “No” and has been for 40-odd years. In fact, hormones are banned for use in chickens. Around the time the Beatles released their first song the chicken folk stopped giving hormones to their stock. This has been a myth that the chicken industry has done its best to dispel for years.

Posted by Glenn Cardwell at 2:59 PM No comments:

Nope. Stevia ia the “new” tabletop sweetener on the market. Vanessa Dwyer, teaching legend from the north-west of Australia wanted some background info on Stevia. When I say “new”, I mean new to Australia. It has been used to sweeten foods in Japan and China for some time, since 1971 and 1984 respectively. There is general agreement that Stevia is safe to add to foods, but like any sweetener you will always have an ongoing debate. Some will argue that there needs to be more testing and others will say that, as it has been consumed for many years in its native habitat (Paraguay), Japan and China, it is likely to be very safe.