Why I can't holiday in Queensland ever again

Excuse me for being somewhat bemused when I heard that the netball controlling body in Queensland has banned orange consumption during the breaks in the game. Yep, the orange is one of the most dangerous things you can ever consume during a netball game.

What could possibly be the problem? You see, when you play sport your body heats up and you lose sweat, so your body is beginning to dehydrate. To help conserve water the body reduces saliva production making the mouth dryer. If you then eat an orange, the naturally acidic orange juice could erode some tooth enamel, as it isn’t washed away by saliva. How do you get around this? Simple. BAN THE EVIL ORANGE! Security! Check that parent’s bag.

Or you could get the girls to drink some water after eating the orange. The water would wash away any residual orange juice and also help replace sweat losses and reduce dehydration. I know it is a really radical and bizarre suggestion, but I think it is worth exploring, don’t you? The water bottle at netball. Could I really have been the first to think of it?

I have two daughters who played netball. I even supplied the oranges (go on, report me to the authorities). No rotten teeth. Maybe they just didn’t play hard and sweat enough. And after this short article, I guess I can never return to Queensland. Pity. A great part of the world. It even has small pockets of common sense. Ask your travel agent where to find them.
Posted by Glenn Cardwell at 8:14 PM 2 comments: 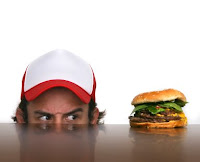 To sleep, perchance to dream – ay, there’s the weight loss

We all enjoy a good snooze because, well, because it just feels good. Awaken refreshed ready to tick off another successful day. Over the last five years we have also heard that a good snooze helps the waistline, which in itself doesn’t make much sense because your metabolic rate (and therefore kJ burn) is at its lowest.

However, if you sleep for less than 6 hours a night, then the stats tell us that you will be plumper than average. Does being overweight make you sleep poorly, or is it the poor sleep making you overweight? There is a suggestion that lack of sleep upsets the balance of certain hormones that control your appetite.


What hormones would they be?
Grehlin and leptin. The levels of grehlin tend to go up and the levels of leptin come down with lack of sleep. This is a problem because grehlin is an orexigenic hormone while leptin is anorexigenic. No, I hadn’t heard of the term ‘orexigenic’ either, until about 10 minutes ago. Orexigenic means it has a stimulating effect on the appetite. An ideal word for casual use at the dinner table (“Thanks, honey. This meal looks particularly orexigenic”). Anorexigenic is the opposite: it dampens the appetite. Of course, you have heard the term anorexia in a different context.

Sleep & hormones
The researchers, who used the word I had never heard of, decided to slice three hours off the regular sleep time of 11 adults, 5 women and 6 men, and track their eating and hormone levels for two weeks. This was done in a sleep laboratory so no cheating was possible. Three months later, the measurements were compared to when the subjects got their regular sleep. Again, that was done in a supervised laboratory.

What does it all mean?
That depends on your viewpoint. It does support previous research suggesting that sleep deprived people eat more food, and therefore become fatter. However, it doesn’t support the notion that it is all due to hormonal changes. Something else could be playing a role. As you all know, a study of 11 adults won’t give you a proof of anything, just an indication of where to direct future research.

And then there was the little problem of the subjects – they were humans. You put humans in a situation like this where they have unlimited “free” food, then they eat more than they need. Which is precisely what they did in this study, whether they were sleep deprived or not. It is the Qantas Club or smorgasbord phenomena. When humans see “free” food they just load up their plates. I mean, who knows, there could be a famine in, gee, 10 minutes. Now you see why it is so much easier to study rats – everyday is the same and the lab always provides free food and accommodation.

In the last three presentations I have given in Adelaide, Perth and Brisbane I have been thrown the question “Doesn’t sugar in the diet cause diabetes?” Maybe it was coincidence, but I thought I would give you a quick answer.

It was believed that sugar caused diabetes about 100 years ago. When Canadians Dr Frederick Banting and graduate student Charles Best isolated insulin and gave the first injection to Len Thompson on 11 January 1922, the research world took a whole new view of the cause and treatment of diabetes. It was quickly realised that sugar in the diet was not involved in either type 1 (requiring insulin injections) or type 2 (usually requiring a better diet and exercise) diabetes.

Type 1 diabetes in young people is likely due to a viral infection that affects insulin-producing cells in the pancreas. Type 2 diabetes, in most cases, is caused by too much food and too little exercise making the cells in the body less sensitive to the insulin from the pancreas. A lifestyle disease, as they say.

The bottom line is that, although it sounds logical, excess sugar in the blood hasn’t got anything to do with sugar in food (just as cholesterol in food has little to do with cholesterol in blood, another confusing physiology story for a later date).
Posted by Glenn Cardwell at 4:02 PM 4 comments: