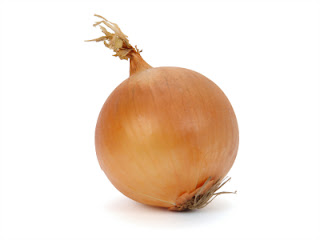 I’ve been attached to the internet for 16 years. Still fondly remember the first desktop modem and its dial up sound. Since that first modem I have never received an unsolicited nutrition/food based email that made any sense. I’ve been told that Diet Coke rots the stomach, that I should never eat bread with fruit because it confuses the digestive enzymes and that margarine is a molecule away from plastic, which makes as much sense as wine being a molecule away from that nice steak you are having with it. And now one about onions and the flu.
The onion email hoax
Apparently when the flu epidemic hit the world after the WW1 a doctor asked a farmer why his family didn’t get the flu when many around did. He believed the solution had been an onion placed in a dish in every room. The doctor supposedly placed the onion under a microscope and discovered it had “absorbed the bacteria, therefore, keeping the family healthy.”
Hold up there! The flu is a virus, so what’s this about absorbing bacteria? Virus. Bacteria. Very, very different. And did I read the onion went under a microscope? Well you are only likely to see a virus under a scanning electron microscope and you couldn’t get hold of one of those until 1965. Sadly, many can’t sense a hoax when it smacks them in the face. If you have time to burn then you can read the email on the snopes.com site http://www.snopes.com/medical/swineflu/onion.asp.
Onion and food poisoning
Some of the onion email hoaxes go on to claim that the onion is one of the highest risk food-poisoning foods around. Why? Because the onion is a bacteria magnet, remember, stopping you getting the flu caused by a virus! They say the onion is not safe even in a zip-lock bag in the fridge. Apparently, cookbook author Zola Gorgon wrote the original story about onions being a common cause of food poisoning. Now, don’t bother looking for cookbooks by Zola Gorgon, just think about her name for a moment. Zola Gorgon.
Raw onions safe
Food safety expert Dr Ben Chapman from North Carolina State University says there haven’t been any recorded food poisoning outbreaks due to raw onions. Not one. He says that onions are not a food that supports pathogenic growth, well, not raw ones.
What does it all mean?
Remember, scary food/nutrient/nutrition emails have a 100% record of being wrong. Just look for the “forward this to everyone you love” at the bottom of the email. It is code for “hoax”.
It is exasperating to educate the public if there are huge sections who lap up a good story, and not for a second ask themselves if the story is plausible. Why don’t we get government programs urging us to leave an onion in a dish as we come into winter? Why isn’t there a Ministry of Onion if it is the best thing for flu avoidance?
What’s the best evidence that someone just made this stuff up for a joke? You probably got it. The cookbook author, Zola Gorgon. Well done. If she existed and was an author she would be listed as Gorgon, Zola. Now you must get it. All a bit cheesey and on the nose. Why don’t you make up a ridiculous food story and send it around and see how quick you get onto snopes.com? And don’t forget to give yourself a silly name.
Posted by Glenn Cardwell at 6:02 PM No comments:

Zinc and the common cold

We have previously discussed that vitamin C is not a useful supplement for lowering the risk of the [http://glenn-glenncardwell.blogspot.com/2011/01/vitamin-c.html common cold]. Our good friends at the Cochrane Database has crunched the science behind what might be a useful adjunct to scare away the common cold virus far better than an onion. The answer is zinc, but you have to get in early.
Zinc taken as a lozenge or syrup within 24 hours of cold symptoms being detected reduced both the severity and duration of the cold in otherwise healthy people. The zinc supplement will need to be taken for at least five days. For some, taking zinc can create side-effects of nausea, especially with the lozenges.
The problem is that no-one is really sure what is the effective dose of zinc. We need between 8mg (women) and 14mg (men) of zinc each day. The Nutrient Reference Values recommend that we don’t consume more than 40mg of zinc a day. There is also evidence that vitamin D, often low in winter, also helps keep the common cold at bay. Maybe, just maybe, D + Zinc could help you sail through your next cold.
Reference:
Singh M, Das RR. Zinc for the common cold. Cochrane Database of Systemic Reviews 2011, Issue 2 (just put this info into your search engine and you will easily find this free downloadable pdf).
Posted by Glenn Cardwell at 5:56 PM No comments: 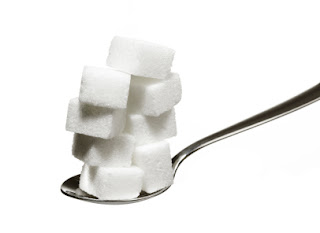 It is nearly forty years since John Yudkin wrote the book Pure, White and Deadly. He thought there was a direct link between sugar consumption and heart disease, since disproven. Are we now eating more sugar than ever or are we eating the same amount as in 1980? Is there a link between our sugar consumption and obesity? Wise people at the University of Sydney have given this some thought.

Sugar consumption, up or down?

Surprising to many who had made assumptions about our sugar consumption, we are eating less than 30 years ago. Yep, less. Hang on, before we go any further, what are we talking about? Sugar is not singular, it is plural. Common sugars include fructose, glucose (also called dextrose), galactose, lactose (glucose joined to galactose), sucrose (fructose joined to glucose), and maltose (two glucose molecules joined together).

Add sugar to your coffee and you are adding sucrose; eat a bowl of yogurt and you are eating lactose, and possibly some added sucrose if it was flavoured yogurt; eat a banana and you get a flavoursome mix of glucose, fructose and sucrose.

One thing that contributed to the drop in sugar in Australia was a big switch from regular soft drink (soda) to diet versions. We are drinking less sugar-sweetened drinks, with the decline starting at the beginning of the century, such that one third of soft drinks now are diet drinks. Even the kids have got the message. Fewer children are consuming sugar-sweetened drinks and those that do are drinking a bit less.

Is sugar making us fatter?

Will getting people to consume less sugar make a dent in the number of overweight? The answer seems to be “No” on a population basis. Australians and the British eat less sugar and gain more fat. The answer might be “Yes” on an individual basis. It is not just soft drink that can add sugar and calories/kJs to the diet, it is the biscuits (cookies), cakes and sweet pastries that add their fair share too. Cutting back on those will reduce sugar, along with fat and sodium.

I dare say that most readers don’t have a sugar problem. The occasional sweet food (eg chocolate) and the occasional sweet drink (eg fruit juice, soft drink) is not going to bring you unstuck. As we consume less sugar, we still become plumper as a nation, so getting Australians and the Brits to cut back further on sugar may not make a big difference to obesity levels. The US, on the other hand, mmmm, maybe Michelle Obama has it on her list.

What you are more likely to have is a sodium problem. Most of you will eat more than you need and possibly venture into the unhealthy levels (especially if you enjoy cheese, olives, sauces, bread, spreads, breakfast cereals). We still have a population stuck in the 1970s worrying about a bit of sugar and not having a clue where their sodium comes from.

Enough on that. I’m off for a lovely Tasmanian camembert on wholegrain toast. Hey, I’ve told you before, I ain’t perfect!

Posted by Glenn Cardwell at 8:13 PM No comments:

It's a bummer about fizzy drinks being acidic. I always drink through a straw when available. However, I don't drink beer through a straw – yet. It is possibly more acidic given it probably has higher carbon dioxide content than soft drinks. Perhaps these drinks should not just have nutrition labeling but also an acid rating! Should we wait for these drinks to go flat?

A good thought Warwick. Maybe we should put the pH level on drinks. As we have discussed before, the acid content of soft drinks, sports drinks and fruit juices is high and can cause tooth enamel erosion.

As far as I can gather wine has a pH around 3.0-3.5 and beer has a pH of about 4, both in the acid range, although not as acidic as fruit juice, soft drinks and sports drinks, which tend to have a pH of 2-3. There have been reported cases of wine tasters, wine makers and even wine lovers suffering marked dental erosion due to the low pH of wine. To reduce wine contact with the teeth, and to stimulate saliva flow (saliva buffers the acid), drink wine with a meal.

Oh, and Warwick, never let your beer go flat! That is plain unnatural.