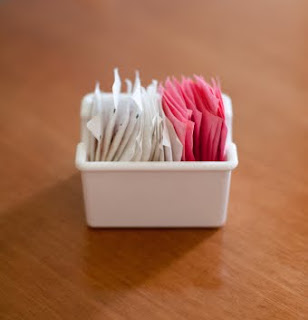 Sweetening agents in food or as a powder or tablet have been around for many years. I have already told you that my folks used saccharin during the sugar restrictions of the 2nd World War. Much misinformation on sweeteners circulates the internet because the world loves to hate stuff they don’t understand.

One thought has been that sweeteners like aspartame (Nutrasweet) at best didn’t make you eat less kilojoules and at worst, made you overeat, countering the close-to-zero calories they offer.

Sugar has been thought as a culprit in weight gain since the 1960s, so replacing sugar with a sweet substitute that provided very few calories was always seen as part of the remedy and would help weight loss. To test whether people compensated for the “missing kilojoules” when consuming low joule sweeteners, researchers first gave test subjects a “pre-load” meal that had either sucrose (cane sugar), or the low joule sweeteners aspartame or stevia (a sweet extract from the leaf of Stevia rebaudiana). They were blind as to which pre-load snack they got.

The pre-load snack had an extra 200 Cals (835 kJ) when the sugar was added, compared to the sweetener. If the low joule sweeteners aspartame or stevia had no effect on appetite, then the subjects should have made up the difference in kilojoules by the end of the day, such that they ate the same number of kilojoules independent of whether the pre-load meal had sugar or sweetener.

At the end of the day, when the pre-load snack had a low joule sweetener, the people ate around 300 Cals (1255 kJ) less food than those who had sugar included. Conclusion: low joule sweeteners helped lower the amount of Cals/kJs eaten over 24 hours.

The pre-load snacks were solid (crackers and cream cheese sweetened with sugar, stevia or aspartame). The results may have been different if the choice was regular or diet soft drink. The people chosen did not have psychological problems with their food. Had they been aware of the kilojoule content of their snacks (or knew they were drinking diet soft drink) they may have made psychological adjustments to what they chose at lunch or dinner. The study was over 24 hours and a compensatory calorie catch-up may have occurred on subsequent days. All the same, this research is consistent with other research suggesting that “diet” food and drinks can help weight control in many people.

When I fly I usually have a water, Diet Coke or Pepsi Max (I’m one of those who can’t really tell the difference) to counter the dry atmosphere in an aircraft. The occasional diet soft drink or food with a low kilojoule sweetener can play its part in stopping overeating. As always, controlling your weight is about eating well and being fit. Low joule sweetened foods can help in a small way.

Posted by Glenn Cardwell at 4:44 AM