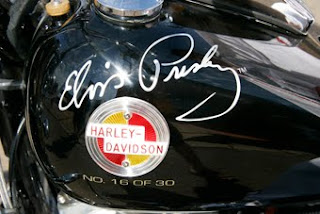 While reading Martin Lindstrom’s book Buyology (http://www.martinlindstrom.com) he mentioned that Harley Davidson had tried to trade mark its engine sound when Japanese bike manufacturers tried to mimic that engine rumble. He described it as the signature fast “potato-potato-potato” sound. I hadn’t heard the sound described that way before. You probably have, and so have many others (put Harley and potato into your search engine).

Ok, nothing to do with food. I just liked the analogy, but not around my house after 10pm please (because the sound wedges into my consciousness and fries my sleep. Hey, I know it’s not funny, but I didn’t think you would read this far). The photo was taken at the Elvis Festival, Parkes, NSW in January 2008. From memory, Kelvin the owner, paid $35,000 for it. And yes, he has the complete Elvis outfit and wig.

Posted by Glenn Cardwell at 4:42 AM