Can you eat yogurt on an empty stomach? 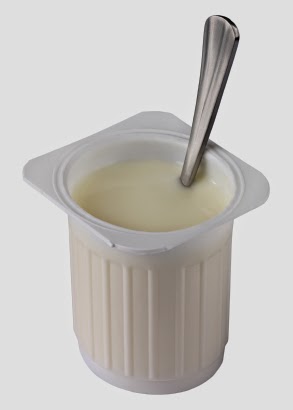 I received a question from Elaine Bo on yogurt:

I recently came across an article in the health section of the Chinese Singtao weekly newspaper regarding the negative impacts of eating yoghurt on an empty stomach. In a nutshell, the article talks about Taiwanese females often eating yoghurt instead of a proper meal as a way of weight loss. And the gastro doctor says that due to the acidic nature of yoghurt, it makes the empty stomach very acidic and is thought to damage the lining, like a stomach ulcer.

I quite enjoy my yoghurt, and will sometimes eat it with muesli, fruit and nuts for breakfast or snack. Being of Chinese decent, my mother often tells me not to do so because of the exact same reason as what was written in the article.

I did a quick Google search and found the apparent reason to avoid yoghurt on empty stomach is because the benefits of lactic acid is rendered ineffective due to the high acidity of stomach acid. I also tried to search for some peer-reviewed journals on PubMed and Medline, but there does not seem to be much done in this area. I was wondering if you could shed some light on this topic? Thank you.

Thanks Elaine. First, we need to know that the stomach lining is designed to handle acid because it naturally produces hydrochloric acid (pH of 1-1.5, strongly acidic) as part of the beginning of digestion. So, the pH of yogurt (being about 4.5, mildly acidic) will have little effect on stomach pH, meaning that yogurt won’t make the empty stomach “very acidic” because the stomach is always likely to be very acidic. Besides, stomach ulcers are commonly due to H. pylori bacteria, not from eating yogurt or any other food. There was a Nobel prize in that discovery.

Yogurt may contain some probiotics, in this case, lactic acid producing bacteria, usually declared on the label. Although, by law, there is a minimum number of probiotic bacteria in yogurt, not all of these bacteria will make it through the stomach and small intestine. However, many will and they then become part of the good bacteria in the large intestine. Probiotics are inactive at 5C in the fridge, but start performing at internal body temperature.

Probiotic bacteria have many potential health properties including quickly re-colonising the large intestine after diarrhea or antibiotic use. There is one caveat – like you, these bacteria need to be fed well, preferring the fibrous leftovers of fruit, vegetables and whole grain cereals. Which means eat well. You may have heard me say that before :-)
Posted by Glenn Cardwell at 11:04 PM

Can we consume curd in empty stomach....Or curd rice as break fast???Plz suggest..