Food and gout: a brief update 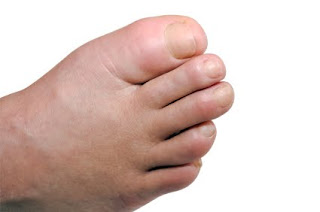 Recently I had to review the dietary treatment of gout for a client. Gout is a common form of arthritis, yet there is very little research on the role of food despite textbooks and the web being full of dietary advice and presumptions.

Uric acid is an end-product compound from the breakdown of purines made within the body and consumed in the diet. Uric acid is normally eliminated via the kidneys so that uric acid stays at normal levels. High levels come from reduced elimination or an increased production. Some medications, such as those for high blood pressure, can also raise uric acid levels.

Gout has long been associated with overweight, binge eating and alcohol consumption. Losing weight and avoiding alcohol is common advice for many people with gout as this reduces the incidence of gout attacks. Beer consumption especially seems to crank up uric acid levels.

The most common and effective treatment for gout is through medication such as uricosuric drugs that increase the excretion of uric acid in your pee.

There has long been speculation that high purine foods are also a culprit in gout. Cutting out very high purine foods like offal, yeast extracts, sardines and anchovies may have an additional modest benefit with drug therapy, although dietary changes rarely lower serum uric acid by much more than 10%. There is now evidence that most purine-containing food, especially non-animal food, have little effect on uric acid levels.

Today, common food advice is still to avoid foods with modest levels of purine, such as peas, legumes, lentils, spinach, asparagus and mushrooms. It is not clear why spinach, asparagus and mushrooms are mentioned so frequently, as green peas, broccoli and Brussels sprouts have more purine yet I have never seen them mentioned once in a text book (and I have a few) or websites giving advice on gout.

The truth is that foods such as dairy foods, possibly due to the dairy proteins, nuts. legumes and vegetables, even those with moderate purine content, seem to be protective against gout. A thorough review of the lifestyle evidence on gout risk states that those eating the most vegetables had a 27% reduced risk of gout compared to those eating the least (ie purine-rich vegetables were associated with a lower gout risk). Low fat dairy foods like milk and yogurt also reduce gout risk.

Sure, if you eat lots of sardines, offal, and kilos of meat every week then maybe you should cut back. Otherwise, just eat and drink healthy if you have gout. Lose weight if necessary. If you are a boozer, cut back to a maximum of two drinks a day. Cutting out specific purine-containing vegetables will have no benefit at all. In fact, you would be doing yourself a nutritional disservice.

And why is the big toe often the site of the first gout attack? The big toe is at the extremity of the body and generally a wee bit cooler than the rest of your body. Sodium urate crystalises at cooler temperatures. When the pain hits, maybe put on a (second) pair of socks.

Posted by Glenn Cardwell at 5:30 PM

A gout attack can be an excruciatingly painful experience. Here, you'll discover what a gout attack is, what causes it, and how it is treated. You'll also discover some natural gout remedy ideas.

Hi Glenn. I'm a 35 year old who has been getting gout for about 18 months now. When I let my diet slip, to more processed foods and alcohol I get gout that lasts more than 2 weeks - even with steroids and Alopurinol.

Good sharing. I read an article title “To Those Having Gout Problem” mentioned that a special gout remedy call gout papaya green tea and it's extremely good to help cure gout issue. See the article at:
http://kidbuxblog.com/to-those-having-gout-problem/

Gout Flares are a Pain

If you’re having a gout flare up NOW, you may want to learn about our study. The anaGO clinical research study is seeking people with gout to help compare an approved gout pain treatment to an investigational medication. Study medication and all study-related procedures are provided at no cost to qualified participants.

Great, you have shared best information about gout treatment, and you have also shared food for gout. If we follow this post and take Herbal Gout Supplements we get fast relief from pain.

I really appreciate  DR AKHIGBE,my name is LAURIE HUGHES . I will never stop testifying DR AKHIGBE. Happiness is all I see now I never thought that I will be cured from HIV virus again. DR AKHIGBE did it for me. I have been suffering from a deadly disease (HIV) for the past 2 years now, I have spent a lot of money going from one place to another, from church to church, hospitals have been my home every day. Constant checks up have been my hobby not until this faithful day,  I saw a testimony on how DR AKHIGBE helped someone in curing his HIV disease in internet quickly I copied his email which is drrealakhigbe@gmail.com just to give him a test I spoke to him, he asked me to do some certain things which I did, he told me that he is going to provide the herbal cure to me, which he did, then he asked me to go for medical checkup after some days, after using the herbal cure and i did, behold I was free from the deadly disease,till now no HIV in me again he only asked me to post the testimony through the whole world, faithfully am doing it now,all the testimony of DR AKHIGBE is true  please BROTHER and SISTER, MOTHER and FATHER he is great, I owe him in return. if you are having a similar problem just email him on drrealakhigbe@gmail.com or you can whats App his mobile number on +2348142454860  He can also cure these diseases like HIV and AIDS HERPES,DIABETICS,CANCER, HEPATITIS B,CHRONIC DISEASES, ASTHMA, HEART DISEASES, EXTERNAL INFECTION, EPILEPSY, STROKE, MULTIPLE SCLEROSIS,GOUT,  NAUSEA,VOMITING OR DIARRHEA LUPUS,ECZEMA,BACK PAIN,JOINT PAIN. .ETC .please email drrealakhigbe@gmail.com    or whats APP him  ..+2349010754824.  He is a real good and honest man.
website...  https:drrealakhigbe.weebly.com