How much fruit and veg do we eat? 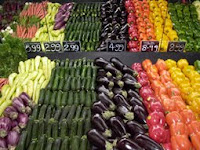 Let’s see if we have got this right – fruit and vegetables are good for you. Why? Well, there are all those wonderful nutrients, all the antioxidants, plus other stuff that seem to protect our brains and eyes, and add the fibre and plant sterols which help our bowels and heart. Of course, they have no added fats, salt or sugars in their natural state. And they are dolphin safe.

Should we be impressed with the list of benefits from fruit and veg? You would think so. But we aren’t. Every group I present to, whether adult or child, have picked up the 2 & 5 message (two fruits and five serves of vegetables in Australia).

Just released is a US report stating that just over a quarter (27%) of American adults eat enough veggies, while about a third (33%) eat enough fruit. Only 14% of their adult citizens are eating both enough fruit and vegetables.

Now comes research telling us that we may have under sold fruit from an antioxidant perspective. When polyphenols, a class of antioxidants, have been measured in the past we only picked up a fifth of the total amount. To find the extra a team of scientists from the UK and Spain used an acid extraction process on apples, peaches and nectarines.

“If non-extractable polyphenols are not considered, the levels of beneficial polyphenols such as proanthocyanidins, ellagic acid and catechin and substantially under estimated,” said lead researcher Sara Arranz.

We have no idea what is a serve size

The good folk promoting fruit and veg tell me they have increased intake by about half a serve of each over the last decade, which is commendable. It may be that one barrier we face is that so many don’t even know what a serve size is. Unbelievably, the survey found that only 4 out of 10 people knew that a piece of fruit (apple, pear, banana) was a serve. What was the other 6 out of 10 thinking? Half an apple? One grape? 0.723 of a medium sized fruit? pi x r2 where r= the radius of the fruit? Who knows? More expectedly, only 1 in 8 knew that half a cup of vegetables was a serve.

Here’s a common argument: Don’t tell people the really healthy level of exercise they should do because you will scare them and they won’t do any exercise at all. You have to be gentle with humans and get them to exercise for 30 minutes a day, before you tell them they should really be exercising for 60 minutes a day, and even more if they have “trouble with their weight”. Should we tell people to eat 1 & 3, and then gradually encourage them to move to 2 & 5? I prefer to tell people the truth. Exercise for 60+ minutes a day, eat 2 & 5, tea and coffee don’t dehydrate you, diet soft drinks don’t cause cancer, and the best cricketers still come from Australia!

Fruits and vegetables aren’t really contributing to health because we just don’t eat enough for them to give us a benefit. Most people don’t know what serve of fruit and vegetables looks like, so maybe we need to make that clear from the outset. With pictures. And then we pass legislation that states that health promotion advertisements need to be simple and fun and not the dictatorial, finger-wagging warnings we seem to get. I have said it many times – when we make fruit and vegetable advertisements like they make beer ads we might have a decent chance of getting men to eat their greens.

Posted by Glenn Cardwell at 8:41 PM

Great article Glenn. What do you think of those 'juice bars' where for around $5 you can get about 400ml of freshly juiced vegies (or fruit)? My local guy does a carrot/beetroot/ginger/something else concoction that's pretty good and seems to have about 5 carrots plus other ingredients juiced into it. Does this count as 5 serves of veg?
thanks, Gary

I think you can eat plenty of fruit in one day, just as well buy viagra buy fruit, but more important are fruits and vegetables.